Accept all
Deny
Preferences
Thank you! Your submission has been received!
Oops! Something went wrong while submitting the form.
Case Study

After implementing Pathlight, Stitch Fix has reduced handling times across their channels, improved CSAT, and employee engagement. This case study will review their build vs buy decision, lessons learned, achieved results, and what’s next.

With over 4 million clients and $2B in revenue, Stitch Fix leverages data and AI to create a personalized shopping experience for each customer. An online personal styling service in the United States and the United Kingdom, Stitch Fix uses recommendation algorithms and data science to offer personalized shopping experiences based on size, budget, and style.

While it’s in Stitch Fix’s corporate DNA to use data in everything it does—both to help customers and internally at the company—it struggled to leverage its valuable data on the employee side. Managers spent hours consolidating data with spreadsheets, and by the time they were done, the metrics were not reflective of the current day—rendering any coaching ineffective. Since implementing Pathlight, they have consolidated data across multiple platforms and provided intelligent tools to help managers deliver insights-driven, in-the-moment coaching, thereby reducing handle time across their channels, improving CSAT, and seeing employee engagement rise and attrition fall.

A need for real-time, digestible data to empower agents and improve daily productivity

“Before Pathlight, we were using multiple platforms to present data to our agents, but data was very platform-specific and took a lot of time for managers to gather, coalesce, and repackage so that agents could digest it,” explains Jonathan Hall, Stitch Fix’s Workforce Program Manager. “Managers would release a report every Monday that would give a snapshot of performance over the previous week.”

Those reports took Jonathan’s team a large chunk of time to gather and understand data, which ate into their available time and resources to support and coach agents. What’s more, releasing a report every Monday didn’t reflect constantly changing metrics. “A report released on a Monday might look very different just a few days later; not to mention, metrics like CSAT have a long tail,” Jonathan says.

Because of their reporting methods, Stitch Fix’s operations had adapted to the delivery of data: Everyone waited for the report to come out on Mondays, but didn’t have their one-on-ones until later in the week, which meant that information was out of date by the time they were discussing it. And when holidays fell on a Monday, reporting was off for the whole week.

Finally, people worried about their one-on-ones: Every week, agents spent six days fearing what they’d hear in their meetings with their managers. “From the agent’s perspective, they were walking into their one-on-ones with some trepidation versus walking in knowing exactly how they were doing, excited to tell their manager how they’ve improved,” explains Jonathan. “With all of the manual steps we were going through and the error rates we were seeing, we knew that having a consistent, real-time, and reliable stream of data was critical for our team.”

Stitch Fix took a measured approach to evaluate Pathlight, looking at efficiency as well as the span of control, or their leader-to-agent ratio—which they hoped to lower. In fact, once Pathlight was rolled out, they were able to decrease their leader-to-agent ratio by 20-30%, thereby reducing leadership headcount. “By granting leaders access to data and the ability to coach to it really deliberately, we made them more effective and empowered,” says Jonathan. “What used to take up a ton of leadership’s time is now a simple matter of checking in on Pathlight’s reports and charts.”

For Jonathan, focusing on the implementation is important, but what happens after implementation, in the day-to-day, is even more critical. “Not only was our Pathlight implementation smooth and successful, but it’s been easy, on an ongoing basis, to add metrics, enhance existing ones, and evolve with our team and suite of tooling,” he says.

They recently added a new customer messaging platform, which added an entirely new set of data to the mix for agents. Even throughout the pilot of the new messaging platform, they were able to display metrics through Pathlight, making sure it could be digested by their agents and the tool would be integrated seamlessly.

Since rolling out Pathlight, Jonathan and his team have enjoyed numerous benefits, including:

Attrition is lower, engagement is higher: Overall, Pathlight has helped Stitch Fix agents achieve trust in their leaders and the organization as a whole. And while the company has low attrition rates compared to their industry as a whole, they’ve seen attrition fall by over 33% since implementing Pathlight. “Our agents are really engaging with the platform and their feedback—they’re driven by it,” Jonathan says.

Real-time data is in the agents’ hands: Using Pathlight, the data has gone from being a cumbersome manual task for managers to process to at the agents’ fingertips on a real-time, instead of weekly, basis. “The biggest revelation rolling out Pathlight has obviously been the real‑time daily data, and, at the edge of that, seeing agents engage with the platform and self-direct on certain metrics,” says Jonathan. “Having access to that data on an immediate basis has proven critical for us.”

Productivity is higher: Because agents no longer have to spend large amounts of their day searching for and interpreting data, they can focus on their tasks and outcomes. “Having the data presented to our agents immediately is a real game-changer for everyone,” Jonathan explains.

Everyone is focused on key metrics: Agents only have a certain amount of mental capacity to dedicate to metrics (and managing them), so it was important to Jonathan not to present agents with 10 or 15 metrics. “Instead, we have our core four to five metrics, and if an agent or leader wants a deep dive on supporting metrics, they can—using Pathlight,” he says.

Managers save time and are more productive: Pathlight saves managers time since they no longer have to coalesce information and make it digestible for agents. They can focus on the insights, not on the data digestion, helping them move towards coaching agents faster.

One-on-ones are data-driven: While Stitch Fix focuses on employee engagement, in most other organizations, operations is a department where one-on-ones are often canceled—due to long queues or other customer support issues. “That’s probably the worst decision to make when it comes to long‑term engagement for your agents, so at Stitch Fix, we’ve always followed a rigid process where weekly one-on-ones happen no matter what,” explains Jonathan. Now, using Pathlight, agents can prepare for their one-on-ones, ready to tell their own stories and work on ways to improve, rather than wasting time with their managers to simply understand the data.

“Without Pathlight, there was anticipation and dread approaching one-one-ones, not unlike getting your report card as a kid. Not having to wait for a weekly report to come out has led to a huge positive change in how our team approaches performance.”

Collaboration happens more easily: Pathlight provides a platform for agents and leaders alike to share ideas, troubleshoot problems, and collaborate on goals together.

Agents and leaders have a more in-depth understanding of tickets: Not only do folks have access to information like handle time, but they can also see ticket-by-ticket detail in Pathlight. So if an agent wonders why their averages changed or what happened with a specific ticket, they can drill into the issue easily.

Transparency and trust: The Stitch Fix team shares the leader board for every metric they track, which drives transparency, honesty, and knowledge sharing. “It encourages people to emulate those who are top performers, to ask for help, and to standardize the processes that lead to the best results across the organization,” says Jonathan. Even in the face of hesitation to share lower performance scores, he has found two things to be true: data is powerful and agents tend to be proactive in lifting each other up when performance scores take a dip.

“One of the most important things, when you're managing agents and coaching up on performance, is trust: Agents need to trust the process and believe that the path being laid forward is attainable. With performance transparency, agents know that something is possible because they can see others achieving it.”

Agents are aligned on critical metrics: For Stitchfix, adopting performance intelligence has been less about finding a new AI-driven insight in their tickets and more about getting all agents aligned on key metrics to drive results. Pathlight enables them to communicate what priorities are, even as they shift.

“Although we talk a lot about productivity, the metric we’ve seen the largest gain around is our chat handle time,” explains Jonathan. They lowered it from ten to eight minutes in the first few months and then moved the needle even further—to six and a half minutes—in the past six months. “That’s a great example to me of how agents can take control of their own destiny as long as they have the tools to manage their time and see their progress,” he says.

Pathlight has also helped many Stitch Fix agents achieve their potential. According to Jonathan, every employee is hired for a reason—they have potential that Stitch Fix wants to help them realize. “By helping everyone level up, we’ve driven engagement across the board,” he says.

Looking to the future, Jonathan thinks about balancing efficiency with providing great service. “A lot of times, that’s where the conflict arises,” he explains. “You want to lower handle times while still taking good care of clients.” For Jonathan and his team, this balance is about finding a middle ground and realizing they can’t have everything. When developing their roadmap, they keep these kinds of balances in mind and always consider the sustainability of new metrics or goals.

“It’s really about understanding how our company philosophy aligns with how we run our contact centers and manage and rank our agents,” he says. “Aligning those principles is critical for our company’s, as well as our agents’ and leaders’, success—and Pathlight helps us do that.” With the success of Pathlight in the contact center, Stitch Fix has also started to leverage performance intelligence with its thousands of stylists. “We’re excited about Pathlight’s roadmap and partnering with them in continuing to empower our employees to provide the best service possible to our customers.” 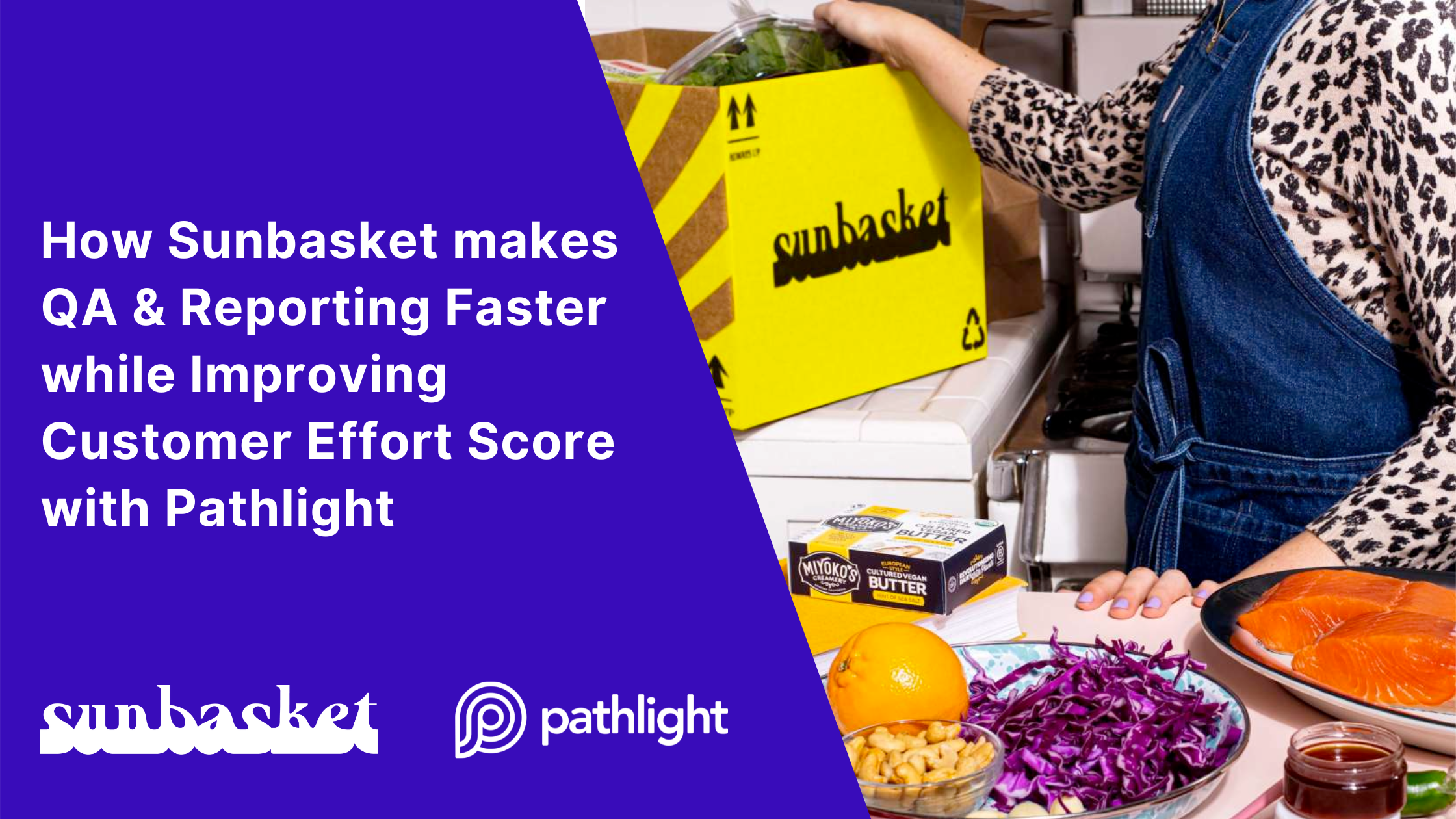 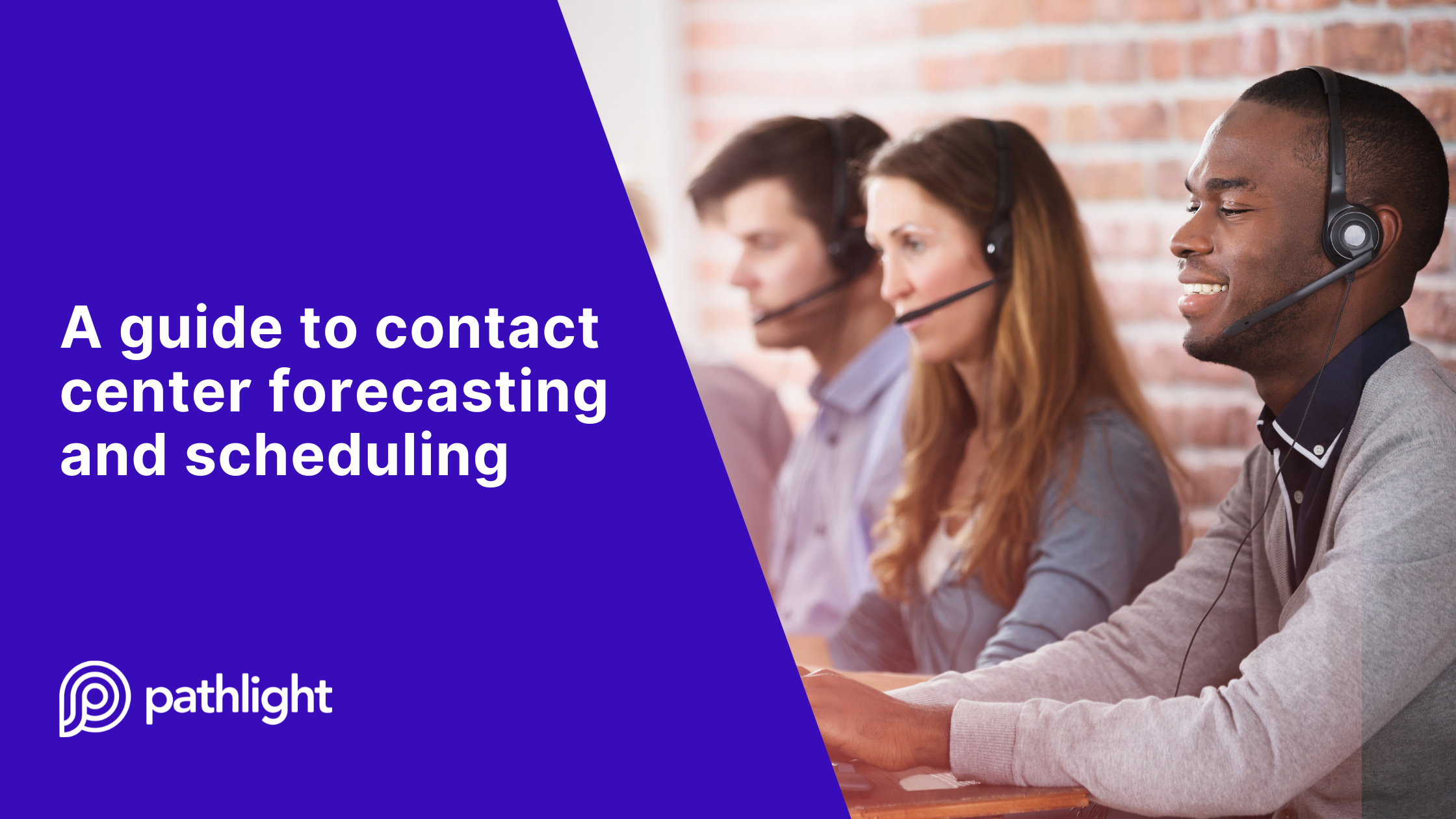 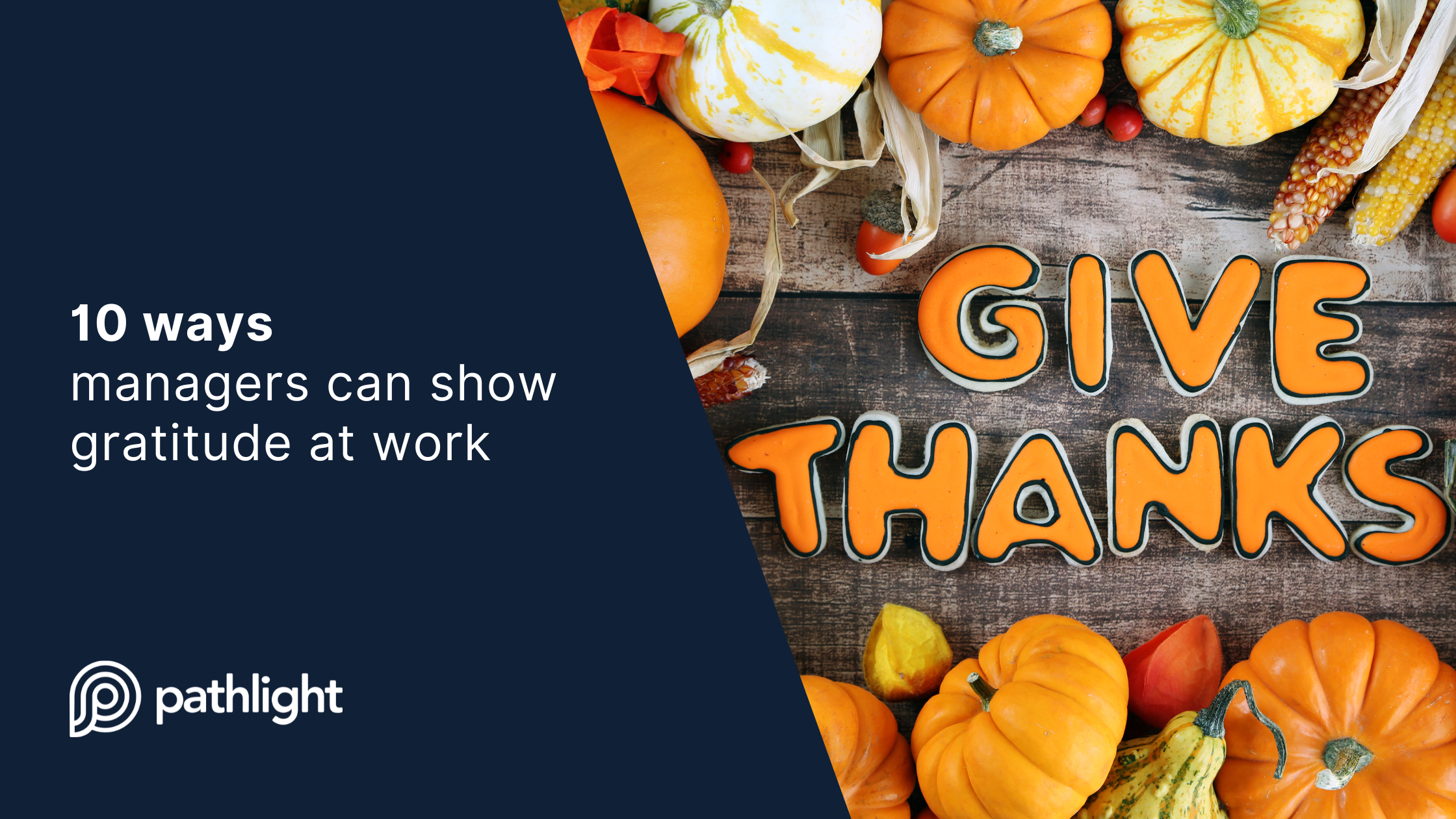 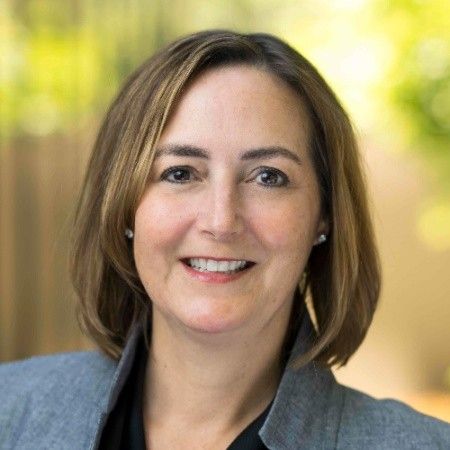